Service: Sundays at 9:30am followed by morning tea and fellowship

Communion: First Sunday of the month

Kids Ministry: Sunday at 9:30am during the school terms

Youth Programme (13 years plus): Sunday after the morning service

Mainly Music: Tuesday at 9:30am during school term

Bible Classes began in Stokes Valley when in 1921 the Minister at Knox Lower Hutt decided to commence a group. There were also occasional services. In 1928 a section was bought but building of a Church had to wait until after the Second World War. The Kirk was opened in 1946. 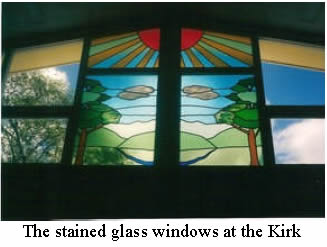 The idea for the stained glass windows in the Kirk originated in a lesson the Junior Bible Class were doing on church buildings. After a presentation by Audrey MacDonald, and with the support of Session and Managers, one of the parents, Barry Harlen, skilled in the craft of glass work, undertook to teach and direct the students in the project. Marilyn Roberts’ brother, Vicar of a Wainuiomata church who had made stained glass windows for his church gave additional advice. The students raised funds and worked weekly on the project. All cut their initials in the bottom layer of lead which is now sealed in the frame. The result is two windows, one a mirror image of the other and they represent Stokes Valley’s hills & streams with the sun as the Light of God above all. Peter Betteridge worked with Barry to organise installation. The original windows were put back to strengthen and protect. A plaque was made/obtained by Peter van Vliet and the windows were dedicated by Rev. Ron Bichan.

The Presbyterian Church in Stokes Valley raised money by holding a barbeque at the home of the Lithgow family where now stands the Stokeswood Rest Home. Thanks to their generosity, it became a big annual event for 13 years from 1955, and was a real family affair. There was a wide variety of entertainment which, over the years, included Godfrey Bowron giving a sheep shearing exhibition, Ray Trimmer, sister of Sir John, showing how to do” the twist”, a fashion show and a magician. Hugely popular was Milton and Poppy Watts with their clever version of “Annie Get Your Gun “. For all this, entry per family was 2/6 (25 cents) With food and all the fun of the fair, between £1,000 and £1,500 was raised each year. The church family working together for the event, created a good atmosphere, with time and effort given gladly. Later, the dream of a new church hall was realized. Built by the church family and opening in 1962, it has been used by the whole community as well as serving as a church.